The Programming Languages that I have learned (Part I) 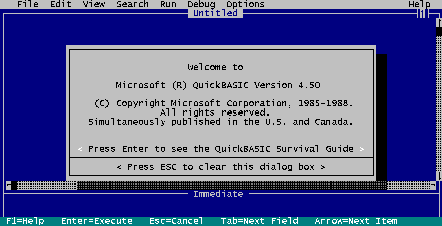 Quick Basic or QB is the first programming language that I learned.

I still remember the day when the teacher announced that our school would begin a “Programming Training Course.” Only 4 or 5 out of 60 students in this classroom could join this class. Then she started to read the names, and I was one of them. The reason was that our math teacher believed my math was good enough to take the class. And I remember, my friend was jealous of me.

QB is the first programming language that I learned, even before I began to learn English. That was the first time I knew some English words such as if, else, and print. At that point, print was too difficult for us to remember. Fortunately, there was a small function: if you type ? and press enter, it will convert it to print.

It was also my first time to learn things like the negative number. Nowadays, 3 + (-5) is really easy for me but, at that time, it was a disaster. And then, you had 3 - (-5). Another nightmare was binary and hexadecimal because we supposed to know how to convert them by hand. I still cannot do them on paper by hand now, but fortunately, I can use some online tools to handle them.

There were two things happened after that which made me appreciate QB.

During my junior high school, I was an English class representative, which means, at the end of one semester, I needed to help the teacher to calculate grades. At that time, all of the scores were written on the paper, and each score had different weight. We had to calculate each score multiplied by the proportion and then add all of them together. Since it was too complicated to do by hand, I asked my teacher if I could write a program to calculate the score. She said sure, so I wrote a program by using QB. After that, we only needed to type each score, and the program would calculate the final grade base on proportion. In the end, we only used half day to calculate all of the scores. The only problem was, the grades were supposed to be two decimal places, but my program gave us five decimal places.

During my senior high school, there was a small part of the math class that was related to programming, and it used QB. I was so glad because it was really easy for me. And it was the first time that I knew more than my math teacher, and I had a better score than my classmates, and everyone was asking me questions.

Should you learn Quick Basic?

Nope. Ten years ago, people could not find many simple programming languages to learn so they chose Quick Basic. However, there are many better languages now, such as Python and Java. If you are wondering which language you should learn first, I would recommend Python.

You may be familiar with another language called ASP.NET. However, this is ASP which stands for Active Server Pages.

I learned this language when I began to think about creating a website. It was during my junior high school, so it was about 9 years ago. At that time, I did not like the static sites because most of them used a lot of images to decorate the web pages and were not very useful. I wanted to create a website that had more interaction with users.

I knew there were some ways to do that but I had no idea what I should do. So, I went to the book store and searched books for web development. I remembered most of them were ASP. (Maybe some of them were ASP.NET, but I am not sure.) I picked up one that was very thick and contained lots of examples and began to learn.

After about 9 years later, I still do not want to say I really know how to use ASP. At that time, I only learned how to copy and paste the code and maybe twist a little bit. But I did not know how to create a dynamic website from the beginning to the end.

I tried to create two websites by using ASP.

One was a small alumni record. It was when we were about to graduate from the junior high school, and everyone was exchanging information with others. At that time, everyone had a alumni book that others could write information on it. However, I wanted to create an alumni recorder online so that everyone could share information online in the same place. You can imagine it like a Facebook. My parents knew this and encouraged me to do that. I bought more books (there was a book that had a specific example about how to write an alumni record website) and followed the instruction to design the user interface, set up the database, and create the website. However, before I could finish it, my junior high school life was ending, and I had to handle senior high school problem.

Another website was a blog for the club I joined in senior high school. Although I hated it, my partners created many beautiful images to decorate the blog while I wrote (actually copy and paste) code to support the blog. It was a small success. We posted a couple of articles to the blog. And we collected users’ feedback about it. However, about half year later, the school believed it was not a good idea to let students had clubs (that was another story). Our club had to stop all the activities, and the small blog had to stop.

By the way, I also learned HTML and CSS at this period. However, since they are not programming languages, I will not talk them here.

Should you learn ASP?

Nope. You may not be able find enough resources about ASP now. If you search ASP on Google, most of the results are related to ASP.NET. If you want to learn a language to create a dynamic website, I would recommend PHP.